Home > Wine Regions and Travel > Cinsault and Sailors: All About South African Wine

Cinsault and Sailors: All About South African Wine

This vibrant region is full of surprises. 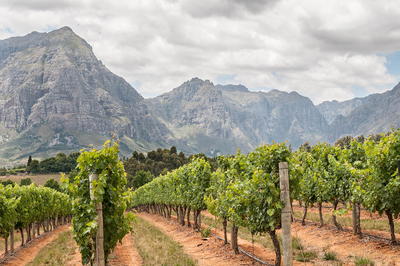 Vineyards in Stellenbosch South Africa
This image courtesy of bigstockphoto.com

The first wine produced in South Africa was supposed to prevent scurvy in sailors for the Dutch East India Company.

Did the wine taste good? No.

Did the wine prevent scurvy? Modern science says: No.

Did they keep making it anyway?

A Short Story About the Long History of South African Wine

During the 17th and 18th centuries, wine was produced in South Africa for the benefit of passing European ships and local drinkers. It tasted pretty bad. In fact, wine was sometimes aged in wooden barrels that had previously stored brined meat. Despite this, thirsty sailors on a six month journey from Europe to India were happy for the wine supply.

The days of producing this wine ended when a Phylloxera plague decimated vineyards in 1886. Massive replanting efforts focused on high-yield grape varieties became a double-edged sword by the 1900’s. Overproduction caused prices to plummet as supply far outstripped demand, creating a “wine lake” effect. Didn’t we promise you wine lakes? Wine became so difficult to sell that some producers poured their wine into lakes and rivers.

In 1918 a governing cooperative, the KWV, was formed to control supply and demand imbalances in South African wine. By limiting how much wine was made, the KWV was able to get the South African wine economy under control. Unfortunately, the KWV didn’t factor in quality when they decided what wine would be made and sold. Innovative winemakers were limited. Improvements in quality stalled, and international demand stagnated.

This stagnation remained until the 1980’s and 1990’s. Boycotts and sanctions related to South Africa’s Apartheid had limited wine production, along with all of the country’s other exports. When the system ended, the South African wine industry was able to open up and find a new energy.

The history of South African wine since 2000 has been bright.

Innovative winemakers are producing good wine, and consumers around the world are buying it.

South African wine exports more than doubled between 2000 and 2015. They are expected to grow by another 13% in the next decade.

Those high-yielding grape varieties that had people pouring wine into lakes are becoming a unique product of the region. Cinsault is one of those grape varieties, and it is becoming one of the country's signature wines. It even led to South Africa’s own grape variety, Pinotage, which is a crossbreed between Cinsault and Pinot Noir.

South Africa also produces many other grape varieties, some of which are very popular in the United States. South African Cabernet Sauvignon and Syrah are both becoming popular and are usually great values for the money. Chenin Blanc and Sauvignon Blanc are popular white varietals.

Are you excited for South African wine yet? We are! If you’re planning a visit to South Africa, wine should be a part of your itinerary. Consider visiting one of these wine regions.

If you’re ready to try some of this great South African wine, then we’ve got some recommendations for you. We’ll leave you with these selections from our wine catalog, and we hope that you’ve enjoyed these stories about South African wine.

New wine regions are being cultivated and discovered all the time, which leads to more diverse and interesting wines. Learn about these 6 emerging wine regions, and try some great wines. 6 Emerging Wine Regions

Do you have a favorite South African wine? Tell us about it in the comments below.

Read NextTypes of Spanish Wine: A Beginner's Guide to Flavors and Regions

Cinsault and Sailors: All About South African Wine

The Wayfarer Chardonnay 2013 overflows with rich fruit aromas and flavors. The nose is full of honeyed aromas of orange blossom, lemon… See more